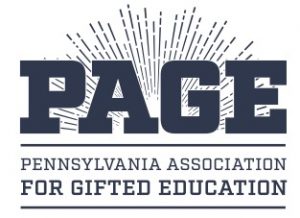 Two early pioneers in gifted education, Margaret A. Neuber and Dr. Hedwig O. Pregler, organized a Conference on Gifted Children and Youth in May, 1951. They coordinated efforts across the state by forming the Pennsylvania Association for the Study and Education of the Mentally Gifted (PASEMG). Their interest emphasized gifted education before the national concern about gifted education that was based on the Russian Sputnik launch in 1957.

PAGE is a member based, non-profit organization with a Federal IRS classification of 501(c)3.  A letter confirming this classification is available upon request. Bylaw changes must be approved by a majority vote of attendees at the membership meeting held at the annual conference. To view our current bylaws, please click here.  Policies are maintained by board vote and align with the bylaws.

The PAGE Board is composed of members elected by the majority vote of attendees at the annual membership meeting.  Board members may serve partial terms when elected by the Board.  The Executive Committee includes the President, Secretary and Treasurer as required by law for a non-profit organization. In addition, the Executive Committee includes a Vice-President and Affiliate Director.  Other positions are filled by Members At Large, as determined by the board.

PAGE has one part-time, paid position, an Administrative Assistant. This role helps PAGE with day-to-day organizational needs, membership lists, conference details, coordination of communication, and other objectives as indicated by board members.

In an attempt to stay up to date and be fiscally responsible, PAGE no longer prints hard copies of articles and mailings but has moved to online options for communications with members, legislators and education officials. Copies of past publications are maintained in PAGE’s storage area.